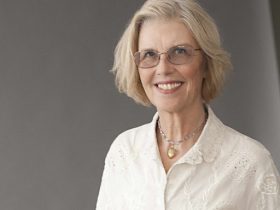 Jane Smiley is an American novelist. She won the Pulitzer for Fiction in 1992 for her novel A Thousand Acres.

Smiley published her first novel, Barn Blind, in 1980 and a 1985 O. Henry Award for her short story Lily, which was published in The Atlantic Monthly. Her best-selling A Thousand Acres, a story based on William Shakespeare's King Lear, received the Pulitzer Prize for Fiction in 1992. It was adapted into a film of the same title in 1997.

Smiley's most recent works are a trilogy of novels about an Iowa family over the course of generations. The first novel of the trilogy, Some Luck, was published in 2014 by Random House. The second volume followed in the spring of 2015, and the third volume in the fall of 2015.