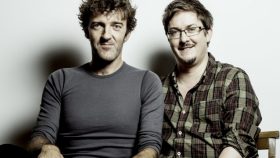 Jason Hazeley and Joel Morris are a British comedy writing duo. Their work includes a collection of parody Ladybird books, and they have written scripts for many British comedy series and films, including That Mitchell and Webb Look, Charlie Brooker's Screenwipe and the Paddington films.

Hazely and Morris have co-written books including Bollocks to Alton Towers, and a series of parody Ladybird books which re-caption original illustrations from the Ladybird series with jokes aimed at an adult audience. Topics have included Donald Trump, hipsters and hangovers and Brexit. The books were so successful that in 2015 only J.K. Rowling, David Walliams and Julia Donaldson sold more copies in the UK.