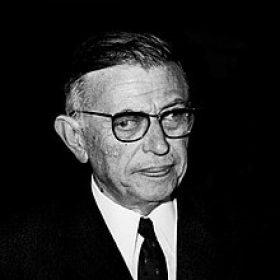 The conflict between oppressive, spiritually destructive conformity (mauvaise foi, literally, "bad faith") and an "authentic" way of "being" became the dominant theme of Sartre's early work, a theme embodied in his principal philosophical work Being and Nothingness (L'Être et le Néant, 1943). Sartre's introduction to his philosophy is his work Existentialism Is A Humanism (L'existentialisme est un humanisme, 1946), originally presented as a lecture.

He was awarded the 1964 Nobel Prize in Literature despite attempting to refuse it, saying that he always declined official honours and that "a writer should not allow himself to be turned into an institution".