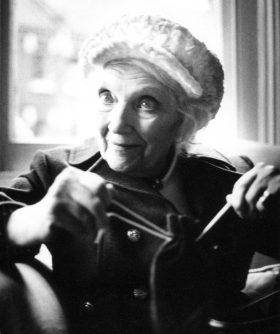 Jean Rhys CBE was a mid-20th-century novelist who was born and grew up in the Caribbean island of Dominica.

From the age of 16, she was mainly resident in England, where she was sent for her education. She is best known for her novel Wide Sargasso Sea, written as a prequel to Charlotte Brontë's Jane Eyre. In 1978, she was appointed a Commander of the Order of the British Empire for her writing.

In the 1940s, Rhys largely withdrew from public life. From 1955 to 1960, she lived in Bude, Cornwall, where she was unhappy, calling it "Bude the Obscure", before moving to Sheraton Fitzpaine, a small village in Devon.

After a long absence from the public eye, she was rediscovered by Selma Vaz Dias, who in 1949, placed an advertisement in the New Statesman asking about her whereabouts, with a view to obtaining the rights to adapt her novel Good Morning, Midnight for radio. Rhys responded, and thereafter developed a long-lasting and collaborative friendship with Vaz Dias, who encouraged her to start writing again. This encouragement ultimately led to the publication in 1966 of her critically acclaimed novel Wide Sargasso Sea.