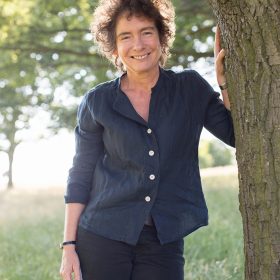 Jeanette Winterson OBE CBE is an English writer, who became famous with her first book, Oranges Are Not the Only Fruit, a semi-autobiographical novel about a sensitive teenage girl rebelling against conventional values. Some of her other novels have explored gender polarities and sexual identity, with later novels also exploring the relationship between humans and technology. She is also a broadcaster and a professor of creative writing.