Tim LaHaye and Jerry B. Jenkins 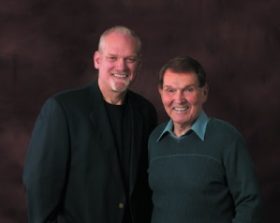 Tim LaHaye was an American evangelical Protestant minister who wrote more than 85 books, both fiction and non-fiction.

LaHaye is best known for the Left Behind series of apocalyptic fiction that depicts the Earth after the pre tribulation rapture which Premillennial Dispensationalists believe the Bible states, multiple times, will occur. The books were LaHaye's idea, though Jerry B. Jenkins, a former sportswriter with numerous other works of fiction to his name, wrote the books from LaHaye's notes.

Jerry B. Jenkins is an American writer and author of the Left Behind series, co-written by Tim LaHaye. Jenkins has written or contributed to over 220 books in multiple genres, including: biography, self-help, romance, mystery, science fiction and young adult fiction. His works often explore Christian eschatology themes and settings.

In 2016, Jenkins was described as a dispensationalist Christian by The Washington Post.