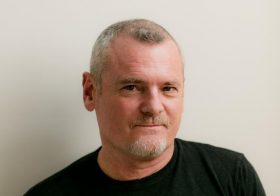 Joe Simpson is an English mountaineer, author, and motivational speaker. While climbing in Peru in 1985, he suffered severe injuries and was thought lost after falling into a crevasse, but he survived and managed to crawl back to his base camp. He described the ordeal in his best-selling 1988 book Touching the Void, which was adapted into a 2003 documentary film of the same name.