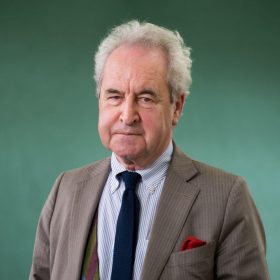 Banville has won the 1976 James Tait Black Memorial Prize, the 2005 Booker Prize, the 2011 Franz Kafka Prize, the 2013 Austrian State Prize for European Literature and the 2014 Prince of Asturias Award for Literature. Elected a Fellow of the Royal Society of Literature in 2007, Italy made him a Cavaliere of the Ordine della Stella d'Italia (essentially a knighthood) in 2017.

Banville published his first novel, Nightspawn, in 1971. A second, Birchwood, followed two years later. The Revolutions Trilogy, published between 1976 and 1982, comprises three works. His 1989 novel The Book of Evidence, shortlisted for the Booker Prize and winner of that year's Guinness Peat Aviation award, heralded a second trilogy. Banville's thirteenth novel, The Sea, won the Booker Prize in 2005. In addition, he publishes crime novels as Benjamin Black.

Banville is considered a contender for the Nobel Prize in Literature. He lives in Dublin.