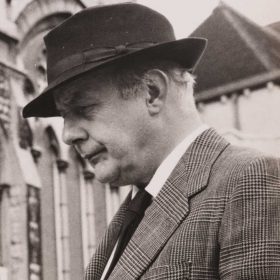 John Betjeman was an English poet, writer, and broadcaster. He was Poet Laureate from 1972 until his death. He was a founding member of the Victorian Society and a passionate defender of Victorian architecture, helping to save St Pancras railway station from demolition. He began his career as a journalist and ended it as one of the most popular British Poets Laureate and a much-loved figure on British television.

The Society for the Protection of Ancient Buildings annually presents a John Betjeman award to recognise the repair and conservation of places of worship in England and Wales.

The John Betjeman Poetry Competition for Young People began in 2006 and was open to 10 to 13-year-olds living anywhere in the British Isles (including the Republic of Ireland), with a first prize of £1,000. In 2020, Private Eye reported that the prize was to close after thirteen years.