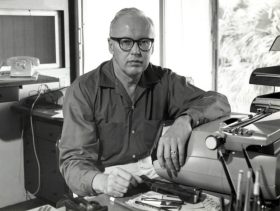 John D. MacDonald was an American writer of novels and short stories, known for his thrillers.

MacDonald was a prolific author of crime and suspense novels, many of them set in his adopted home of Florida. One of the most successful American novelists of his time, MacDonald sold an estimated 70 million books in his career. His best-known works include the popular and critically acclaimed Travis McGee series, and his 1957 novel The Executioners.

In 1972, the Mystery Writers of America bestowed upon MacDonald its highest honor, the Grand Master Award for lifetime achievement and consistent quality. Stephen King praised MacDonald as "the great entertainer of our age, and a mesmerizing storyteller." Kingsley Amis said, MacDonald "is by any standards a better writer than Saul Bellow, only MacDonald writes thrillers and Bellow is a human-heart chap, so guess who wears the top-grade laurels."