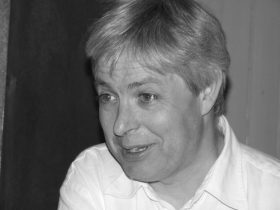 Jonathan Coe FRSL is an English novelist and writer. His work has an underlying preoccupation with political issues, although this serious engagement is often expressed comically in the form of satire. For example, What a Carve Up! reworks the plot of an old 1960s spoof horror film of the same name. It is set within the "carve up" of the UK's resources which was carried out by Margaret Thatcher's Conservative governments of the 1980s.

He published his first novel, The Accidental Woman, in 1987. In 1994 his fourth novel What a Carve Up! won the John Llewellyn Rhys Prize, and the Prix du Meilleur Livre Étranger in France. It was followed by The House of Sleep which won the Writers' Guild of Great Britain Best Novel award and, in France, the Prix Médicis. As of 2019, Coe has published twelve novels.

Coe's latest book Middle England, has been shortlisted for the Costa prize 2019 in the Novel category.