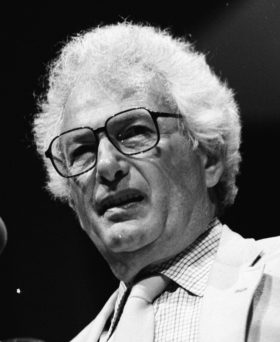 Joseph Heller was an American author of novels, short stories, plays, and screenplays. His best-known work is the novel Catch-22, a satire on war and bureaucracy, whose title has become a synonym for an absurd or contradictory choice.

While sitting at home one morning in 1953, Heller thought of the lines, "It was love at first sight. The first time he saw the chaplain, [Yossarian] fell madly in love with him." Within a week, he had finished the first chapter and sent it to his agent. He did not do any more writing for the next year, as he planned the rest of the story. The initial chapter was published in 1955 as Catch 18, in Issue 7 of New World Writing. Just before publication, the novel's title was changed to Catch-22.

The novel was published in hardback in 1961 to mixed reviews, with the Chicago Sun-Times calling it "the best American novel in years", while other critics derided it as "disorganised, unreadable and crass." It sold only 30,000 hardback copies in the United states in its first year of publication. Reaction was very different in the UK, where, within one week of its publication, the novel was number one on the bestseller lists.

In 1981, Heller was diagnosed with Guillan-Barré, a debilitating syndrome that was to leave him temporarily paralysed. He died of a heart attack at his home in Long Island, in December 1999, shortly after the completion of his final novel, Portrait of an Artist, as an Old Man.