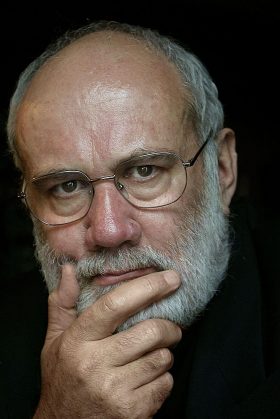 Julian Stockwin was sent at the age of fourteen to Indefatigable, a tough sea-training school. He joined the Royal Navy at fifteen before transferring to the Royal Australian Navy, where he served for eight years in the Far East, Antarctic waters and the South Seas. In Vietnam he saw active service in a carrier task force.

After leaving the Navy (rated Petty Officer), Julian practised as an educational psychologist. He lived for some time in Hong Kong, where he was commissioned into the Royal Naval Reserve. He was awarded the MBE and retired with the rank of Lieutenant Commander. He now lives in Devon with his wife Kathy.
Julian writes historical action adventure novels. He is the author of the Kydd series, the story of one man's journey from pressed man to admiral in the age of fighting sail. Seventeen books have been published to date, with another six projected. As well, he has written Stockwin's Maritime Miscellany, a little non-fiction tome and his historical fiction titles include Kydd and Mutiny.