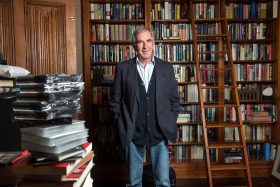 Robert Harris is the author of eleven bestselling novels: the Cicero Trilogy - Imperium, Lustrum and Dictator - Fatherland, Enigma, Archangel, Pompeii, The Ghost, The Fear Index, An Officer and a Spy, which won four prizes including the Walter Scott Prize for Historical Fiction, and Conclave. His forthcoming book, Munich, coming out in September 2017, is set over the four days of the Munich Conference, and is filled with the real-life characters and events of the time. Several of his books have been filmed, including The Ghost, which was directed by Roman Polanski. His work has been translated into thirty-seven languages and he is a Fellow of the Royal Society of Literature. He lives in West Berkshire with his wife, Gill Hornby.