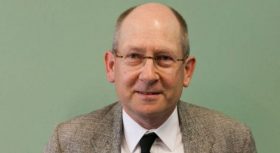 Stephen Baxter was born in Liverpool, England, in 1957 and now lives in Northumberland. Since 1987, he has published somewhere over forty books, mostly science fiction novels, and over a hundred short stories.

Stephen holds degrees in mathematics, from Cambridge University, engineering, from Southampton University, and in business administration, from Henley Management College. He worked as a teacher of maths and physics, and for several years in information technology. Today, he is a Chartered Engineer and Fellow of the British Interplanetary Society.

His first professionally published short story appeared in 1987, and his first novel, in 1991, becoming a full-time author in 1995. He is also a President of the British Science Fiction Association, and a Vice-President of the HG Wells Society.

Voyage was dramatised by Audio Movies for BBC Radio and broadcast in 1999.

Baxter's TV and movie work includes development work on the BBC's Invasion: Earth, broadcast in April-May 1998, and the script for Episode 3 of Space Island One, broadcast on Sky One on 21 January 1998.