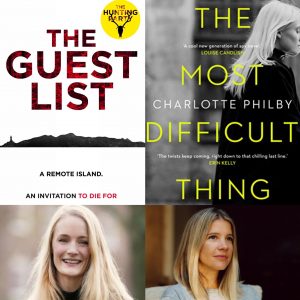 Goldsboro Books are very pleased to be partnering with The Times and Sunday Times Crime Club, and heading back to Browns in Covent Garden, to host this exciting event with No.1 bestselling author Lucy Foley and the author of The Most Difficult Thing (editor's pick on Radio 4's Open Book), Charlotte Philby.

Lucy will be discussing her new book, The Guest List, and reflecting on the incredible success of her previous novel, The Hunting Party.

The hour-long talk, taking place in the Barrister's Court, will begin at 6.30pm, with the opportunity for guests to buy all three books, and have them signed by their author, afterwards.

On a remote island, guests gather for the wedding of the year - the marriage of Jules Keegan and Will Slater.

The wedding cake has barely been cut when one of the guests is found dead. And as a storm unleashes its fury on the island, everyone is trapped.

Lucy Foley studied English Literature at Durham and UCL universities and worked for several years as a fiction editor in the publishing industry before leaving to write full-time. The Hunting Party, her debut novel went straight to No.1 in the Sunday Times paperback chart.

Lucy is also the author of three historical novels, which have been translated into sixteen languages. Her journalist has appeared in ES Magazine, Sunday Times Style, Grazia and more.

Charlotte Philby is a London-based author, journalist and broadcaster. Her debut novel The Most Difficult Thing was published by HarperCollins' Borough Press and was selected as the editor's pick on Radio 4's Open Book, and tipped as the debut novel to watch out for in the Observer's New Voices feature 2019.

The Times and Sunday Times Crime Club is a monthly bulletin that delivers all that’s best in crime writing straight to your inbox.