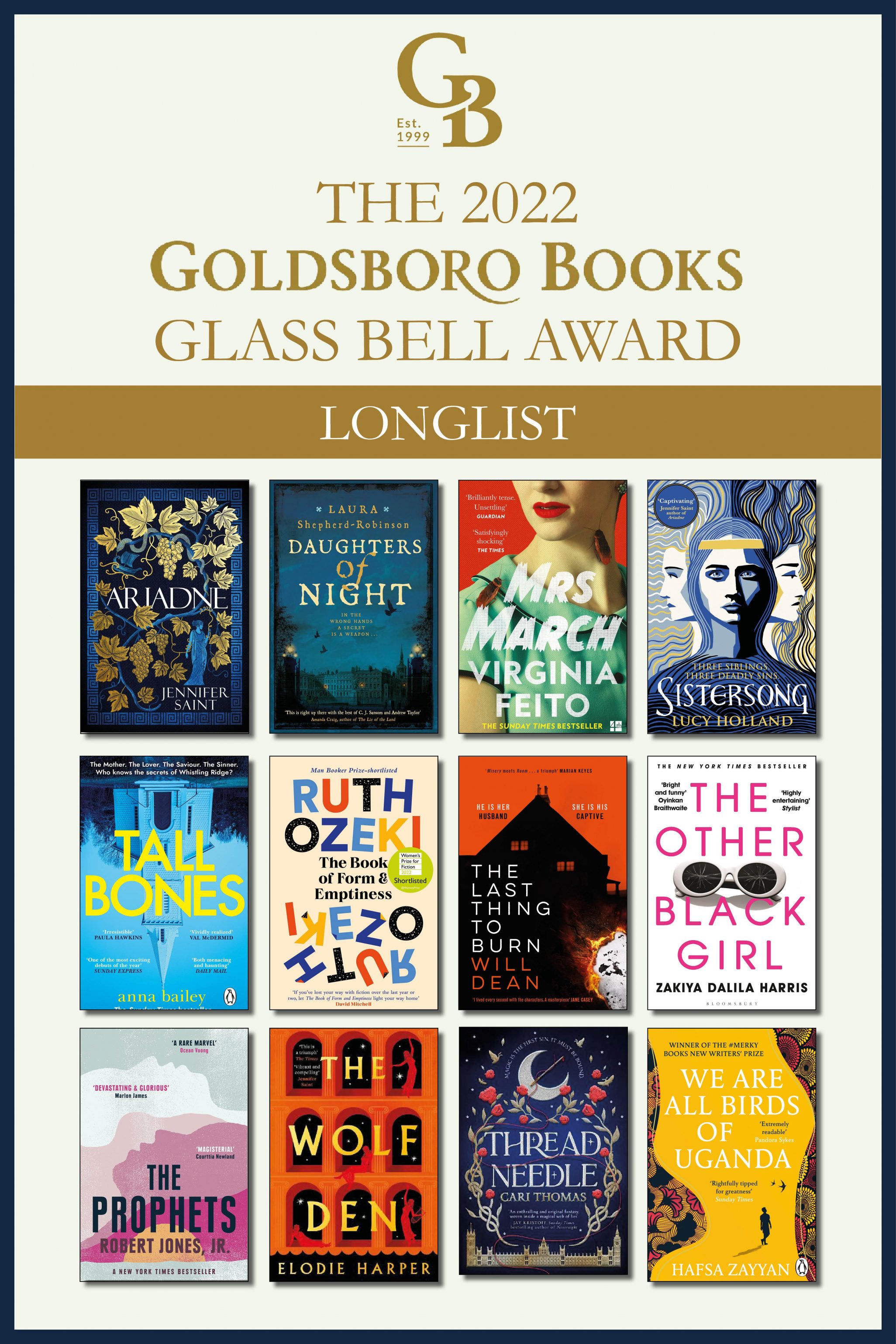 Goldsboro Books have announced the twelve titles longlisted for the 2022 Glass Bell Award. Now in its sixth year, the Glass Bell Award celebrates the best storytelling across contemporary fiction, regardless of genre. The 2022 longlist heralds another strong year for debuts – making up just under half of the longlist- including debut thrillers The Other Black Girl by Zakiya Dalila Harris, Anna Bailey’s creepy and atmospheric novel Tall Bones, and Mrs March by darkly funny, Spanish author Virginia Feito.

Spanning historical, literary, crime, thriller and fantasy, the Glass Bell longlist also includes acclaimed authors, including Booker-shortlisted author The Book of Form and Emptiness by Ruth Ozeki, which was also recently shortlisted for the Women’s Prize, Laura Shepherd-Robinson and her novel Daughters of Night, and Will Dean with The Last Thing to Burn, both of which have been longlisted for the CWA Gold Dagger and Theakston’s Old Peculier Crime Novel of the Year.

The sole fantasy novel on the 2022 Glass Bell longlist is the enthralling bestselling novel Threadneedle by Cari Thomas, which draws readers into the magical city nestled within the boroughs of London.

David Headley, Goldsboro Books co-founder and MD, and founder of the Glass Bell, says:
“Every year, we are chomping at the bit to get together and discuss our favourite books published in the previous year; and 2022 was no exception.

Once again, the longlist is incredibly exciting and without one weak link. Every year, the judging process gets more difficult as the standard of publishing continues to grow - this year might be our trickiest yet.”

The Glass Bell Award is judged by David and his team at Goldsboro Books. It is the only prize that rewards storytelling in all genres from – romance, thrillers and ghost stories, to historical, speculative and literary fiction and – is awarded annually to ‘a compelling novel with brilliant characterisation and a distinct voice that is confidently written and assuredly realised’. The shortlist of six will be announced on 28th July, with the winner, who will receive both £2,000, and a beautiful, handmade glass bell, to be announced on 8th September.

Last year, debut author Clare Whitfield was announced as the fifth winner of the prize for her historical thriller, People of Abandoned Character. A thrilling and atmospheric take on the Jack the Ripper story, published by Head of Zeus, was selected for its ‘fresh and unique’ approach to the story by the 2021 jury, who called it ‘a thoughtful and compelling exploration of the endless violence faced by women of all walks of life.’