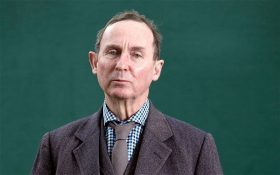 Andrew Normal Wilson was born in Staffordshire in 1950, and is best known as a biographer, novelist, journalist and essayist. Wilson was educated at Rugby School and later attended New College, Oxford (B.A., 1972; M.A., 1976). Initially drawn to the teaching profession and priesthood, Wilson settled upon a life of writing, and published his first novel, The Sweets of Pimlico in 1977. He has since published over 40 works of fiction and non-fiction.

He is a regular voice on BBC radio, and an occasional columnist for the Daily Mail, Telegraph, London Evening Standard, Financial Times, the Times Literary Supplement, New Statesman, The Spectator and The Observer. A selection of Wilson’s journalism can be found in his collection Pen Friends from Porlock (1989)

A Fellow of the Royal Society of Literature, and an award-winning biographer and a celebrated novelist, Wilson holds a prominent position in the world of literature and journalism.