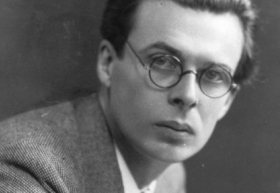 Aldous Leonard Huxley was born in 1894, in Godalming, Surrey.

He was an English novelist and critic gifted with an acute and far-ranging intelligence whose works are notable for their wit and pessimistic satire. He remains best known for one novel, Brave New World (1932), a model for much dystopian science fiction that followed.

The author’s lifelong preoccupation with the negative and positive impacts of science and technology on 20th-century life, expressed most forcefully in Brave New World but also in one of his last essays, written for Encyclopaedia Britannica's 1963 volume of The Great Ideas Today, about the conquest of space, make him one of the representative writers and intellectuals of that century.