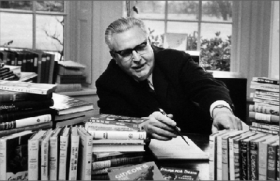 He created several characters who are now famous, such as The Toff (The Honourable Richard Rollison), Commander George Gideon of Scotland Yard, Inspector Roger West, The Baron (John Mannering), Doctor Emmanuel Cellini and Doctor Stanislaus Alexander Palfrey. The most popular of these was Gideon of Scotland Yard, who was the basis for the television series Gideon's Way and for the John Ford movie Gideon's Day (1958). The Baron character was also made into a 1960s TV series.

In 1953, John Creasey founded the Crime Writers' Association (CWA) in the UK. The CWA New Blood Dagger is awarded in his memory, for first books by previously unpublished writers; sponsored by BBC Audiobooks, it includes a prize of £1000. This award was known previously as the John Creasey Memorial Dagger.