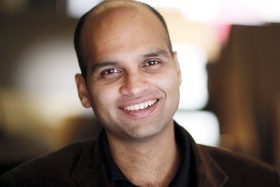 Aravind Adiga, born 1974, is an Indo-Australian writer and journalist. His debut novel, The White Tiger, won the 2008 Man Booker Prize.

Aravind Adiga began his journalistic career as a financial journalist, interning at the Financial Times. With pieces published in the Financial Times and Money, he covered the stock market and investment, interviewing, amongst others, Donald Trump. His review of previous Booker Prize winner Peter Carey's book, Oscar and Lucinda, appeared in The Second Circle, an online literary review.

He was subsequently hired by TIME, where he remained a South Asia correspondent for three years before going freelance. During this freelance period, he wrote The White Tiger.