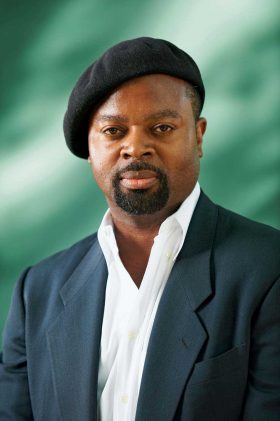 Poet and novelist Ben Okri was born in 1959 in Minna, northern Nigeria, to an Igbo mother and Urhobo father. He grew up in London before returning to Nigeria with his family in 1968. Much of his early fiction explores the political violence that he witnessed at first hand during the civil war in Nigeria. He left the country when a grant from the Nigerian government enabled him to read Comparative Literature at Essex University in England.

He was poetry editor for West Africa magazine between 1983 and 1986 and broadcast regularly for the BBC World Service between 1983 and 1985. He was appointed Fellow Commoner in Creative Arts at Trinity College Cambridge in 1991, a post he held until 1993. He became a Fellow of the Royal Society of Literature in 1987, and was awarded honorary doctorates from the universities of Westminster (1997) and Essex (2002).

His first two novels, Flowers and Shadows (1980) and The Landscapes Within (1981), are both set in Nigeria and feature as central characters two young men struggling to make sense of the disintegration and chaos happening in both their family and country. The two collections of stories that followed, Incidents at the Shrine (1986) and Stars of the New Curfew (1988), are set in Lagos and London.

In 1991 Okri was awarded the Booker Prize for Fiction for his novel The Famished Road (1991). Set in a Nigerian village, this is the first in a trilogy of novels which tell the story of Azaro, a spirit child. Azaro's narrative is continued in Songs of Enchantment (1993) and Infinite Riches (1998). Other recent fiction includes Astonishing the Gods (1995) and Dangerous Love (1996), which was awarded the Premio Palmi (Italy) in 2000. There followed In Arcadia (2002) and Starbook (2007).

In his latest book, Tales of Freedom (2009), Okri brings together poetry and story.

Ben Okri is a Vice-President of the English Centre of International PEN, a member of the board of the Royal National Theatre, and was awarded an OBE in 2001. He lives in London.