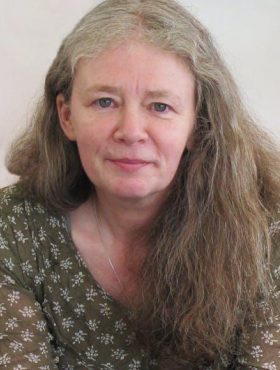 Catherine Fisher was born in Newport, Wales. She graduated from the University of Wales with a degree in English and a fascination for myth and history. She has worked in education and archaeology and as a lecturer in creative writing at the University of Glamorgan. She is a Fellow of the Welsh Academy.

Catherine has won many awards and much critical acclaim for her work. Her poetry has appeared in leading periodicals and anthologies and her volume Immrama won the WAC Young Writers' Prize. She won the Cardiff International Poetry Competition in 1990.

Her first novel, The Conjuror's Game, was shortlisted for the Smarties Books prize and The Snow-Walker's Son for the W.H.Smith Award. Equally acclaimed is her quartet The Book of the Crow, a classic of fantasy fiction.

The Oracle, the first volume in the Oracle trilogy, blends Egyptian and Greek elements of magic and adventure and was shortlisted for the Whitbread Children's Books prize. The trilogy was an international bestseller and has appeared in over twenty languages. The Candleman won the Welsh Books Council's Tir Na n'Og Prize and Catherine was also shortlisted for the remarkable Corbenic, a modern re-inventing of the Grail legend.

Her futuristic novel Incarceron was published to widespread praise in 2007, winning the Mythopoeic Society of America's Children's Fiction Award and selected by the Times as its Children's Book of the Year. The sequel, Sapphique, was published in September 2008.