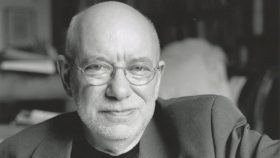 Clive Sinclair was born on 19 February 1948. He grew up in North London and later studied at the universities of East Anglia and California at Santa Cruz.

In 1981 he was awarded a Bicentennial Arts Fellowship, and in 1983 was named by Granta as one of twenty Best of Young British Novelists. In 1988 he was the British Council Guest Writer-in-residence at the University of Uppsala in Sweden. In 1996 he was the British Library Penguin Writer’s Fellow. As a Guest Lecturer at his former universities, he specialised in creative writing, detective fiction, gothic fiction and Holocaust literature.

Clive Sinclair was elected a Fellow of the Royal Society of Literature in 1983. He died on 5 March 2018.