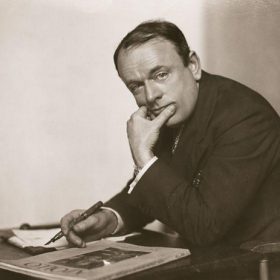 D.B.Wyndham Lewis was a British writer best known for his humorous contributions to newspapers and for biographies. His family were originally from Wales, but he was born in Liverpool and brought up in Cardiff.

He served in the Welch Regiment during World War I, and afterwards joined the Daily Express where he was briefly the newspapers Literary Editor.