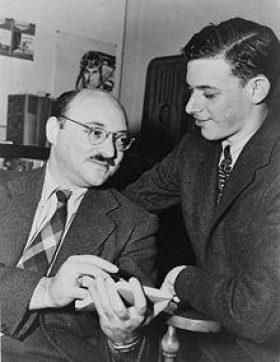 Ellery Queen is a pseudonym created in 1929 by crime fiction writers Frederic Dannay and Manfred Bennington Lee and the name of their main fictional character, a mystery writer in New York City who helps his police inspector father solve baffling murders.

Dannay and Lee wrote most of the more than thirty novels and several short story collections in which Ellery Queen appeared as a character, and their books were among the most popular of American mysteries published between 1929 and 1971.