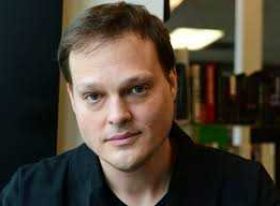 Garth Greenwell is an American poet, author, literary critic, and educator. He has published the novella Mitko (2011) and the novels What Belongs to You (2016) and Cleanness (2020). He has also published stories in The Paris Review and A Public Space, and writes criticism for The New Yorker and The Atlantic.

In 2013, Greenwell returned to the United States after living in Bulgaria to attend the University of Iowa Writers' Workshop as an Arts Fellow.

His debut novel, What Belongs to You, was called the "first great novel of 2016" by Publishers Weekly. His second novel, Cleanness, was published in January 2020 and was well received by critics.

Green well has received the Grolier Prize, the Rella Lossy Award, an award from the Dorothy Sargent Rosenberg Foundation, and the Bechtel Prize from the Teachers & Writers Collaborative. He was the 2008 John Atherton Scholar for Poetry at the Bread Loaf Writers' Conference.