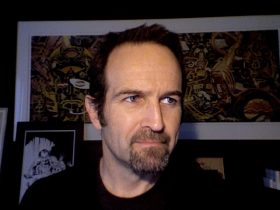 Glen David Gold is an American novelist, memoirist and screenwriter.

Known for his bestselling novels exploring the roles of entertainment and popular culture in historical America, he has also published a critically acclaimed memoir and worked extensively in a broad range of media, including comics, television and podcasting. Gold is also a collector and authority on comics and graphic novels, particularly the works of Jack Kirby and other architects of the Marvel Universe.