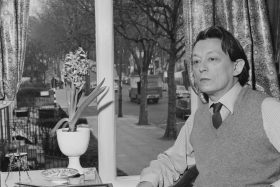 James Pope Hennessy was a British biographer and travel writer.

Largely owing to his mother's influence, he decided to become a writer and left Oxford in 1937 without taking a degree. He went to work for the Catholic publishers Sheed and Ward as an editorial assistant. While working at the company's offices, in Paternoster Row in London, he worked on his first book, London Fabric, for which he was awarded the Hawthornden Prize. During this period, he was involved in a circle of notable literary figures including Harold Nicolson, Raymond Mortimer and James Lees-Milne.