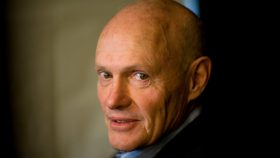 Justin Cartwright was a British novelist, originally from South Africa.

Cartwright passed away in 2018.