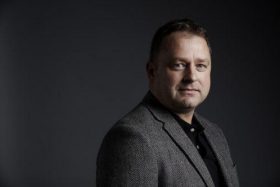 The series began with Tony's debut novel - the political action thriller 'Killer Intent' - which was released in January 2018 and selected for the inaugural Zoe Ball Book Club on ITV. 'Killer Intent' became a fixture in the WH Smith bestseller list for almost four months of 2018 and was included in the Crime Time Best of the Year 2018. The series continued in February 2019 with the release of legal thriller 'Marked For Death', which was picked for the Richard and Judy Book Club that summer and which cemented Tony as a fast-growing name in crime fiction. The series now continues with the upcoming launch of the third instalment, 'Power Play'; enjoying incredible advanced reviews from some of the biggest names in the genre, 'Power Play' is an international political thriller that moves between Washington DC, New York City, London and Afghanistan as Joe Dempsey investigates the White House itself, discovering that 'The Enemies Are Not at the Gate. They're Already Inside.'

Tony grew up in London with ambitions to be both a thriller writer and a criminal barrister. He achieved the latter aged just 22 and in the two decades that followed he has prosecuted and defended in many of the most serious and widely reported trials nationwide, although the bulk of his time has been spent in London and the world famous Old Bailey. His legal practice has focused on terrorism, murder, corruption, kidnap, extortion and fraud, and has brought him into close contact with Scotland Yard, GCHQ, the Security Service and the Ministry of Defence. He has also defended in matters with an international element involving agencies such as the FBI, and he was part of a small selection of barristers picked to train State Prosecutors and Public Defenders in the United States. For over a decade he has been recognised as a 'leader in his field'.


Tony is also a former sportsmen, having played Rugby Union for many years as well as being a former champion boxer. As a boxer he competed internationally at heavyweight and won a host of domestic amateur championships over a successful 12 year career in the sport.

Thanks to the combination of his experiences both professionally and in sport, Tony brings a wealth of detail, personal insight and real-life experience to the legal, the procedural and the violent elements of his unputdownable thrillers.

In 2018 the rights to the ongoing 'Killer Intent' series were purchased by Liberty Films - an independent production company owned by BAFTA Award winning director Duncan Jones and his producer/partner Stuart Fenegan - who, along with Tony, are currently adapting the first book as the opening season of an ongoing Devlin/Dempsey TV Series.